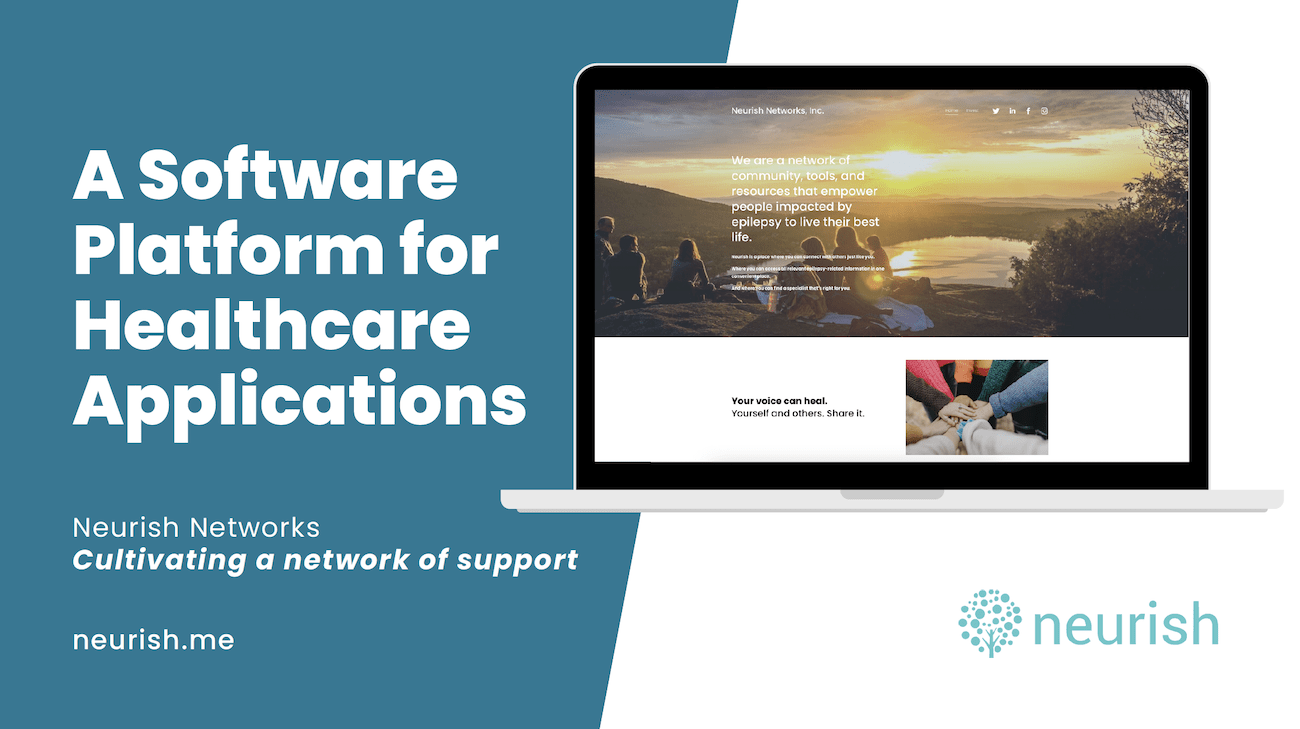 Physicians and doctors are experts on treating patients for medical issues. However, many times, doctors lack the ability to provide social support to their patients and caregivers.

Imagine being given a prescription for a medication and then also being given a link to an application that lets you connect with others who have been through a similar experience. Then imagine being able to find all the information you want in one central place.

All these applications can be built by Neurish using their proprietary platform.

Friends With Epilepsy is an online community for patients, caregivers, families, and friends impacted by epilepsy. Features include creating a profile that allows you to find others with similar experiences to yours, using geolocation to locate users near you or globally using a map, and much more.

You can register at FriendsWithEpilepsy.com/Register.

We know accessing the right medical professional is one of the most important steps in your journey. That’s why we’ve compiled a free database of specialists from around the country.

Visit EpilepsyDocs.com to check out the application.

Neurish was created by Phil Gattone. His inspiration for creating the company comes from a personal experience he had growing up with epilepsy. Phil was first diagnosed when he was four years old. His first seizure happened in the middle of the night and would not stop for over an hour.

Phil went on to have thousands of seizures and was having almost 300 a day at one point. Fortunately, he had his family to advocate for him. They started to learn about epilepsy, went to all the support groups, tried all the medications, and visited doctors all over the country. Many doctors said they couldn’t do anything to help their son. But, eventually, they found a doctor who said he could do something. He discovered that Phil was a candidate for brain surgery.

That summer, Phil had surgery and it resulted in fewer seizures. However, a few months later the seizures came back and he stopped speaking. Things were getting worse, again. So, the next year, Phil underwent another brain surgery. The second surgery helped but he still needed to take medication and required special help in the classroom.

After the surgeries, Phil struggled socially. He couldn’t relate to other kids. He was isolated and felt alone because no one wanted to be around him. Fortunately, he had his family and a few friends who supported him when he was struggling and feeling alone. His family was always there for him and encouraged him to continue to work hard and not give up.

Growing up, Phil discovered he had a passion for technology. He spent his free time learning about the different software platforms and programming languages available at the time. He continued his studies into college and graduated with a degree in electrical and computer engineering. Since then, he has worked for defense contractors, healthcare organizations, and government agencies.

Growing up, Phil has also met thousands of individuals with epilepsy. Most of them don’t have the support system he had. Their doctor provides them with treatments and therapies that may help control their seizures, but they don’t have a community of people they can share their experience with. Phil knows from experience how important a social support system is.

Without it you become depressed, feel alone, embarrassed, and frustrated.
So, Phil saw this problem as an opportunity and created Neurish. He uses his past experience with epilepsy as motivation to develop Neurish and keep moving forward despite any obstacles they may experience.

Phil Gattone
Phil is CEO & founder of Neurish. He has used his personal experience of growing up with epilepsy, a chronic seizure disorder, as his motivation and inspiration to create the company.

He has grown up with epilepsy and has a very extensive network within the epilepsy community including VIPs and  high wealth individuals. His background is in electrical and computer engineering with 12+ years of software engineering experience.

Elisha Phoenix
Elisha is a cofounder and the Product Design Lead of Neurish. She shapes design directions and translates user feedback into engaging experiences for users.

Elisha has over 14 years of experience designing experiences for world-class digital companies, cloud-based, and social marketing organizations. She's created experiences for many well known and highly used brands across a variety of industries that drive outcomes for both businesses and users.

Epilepsy is just the start of Neurish. Our platform is plug-in-play and allows us to easily develop additional applications for individuals impacted by parkinson’s, autism, stroke, and other chronic conditions.

Imagine being given a prescription for a medication and then also being given a link to an application that provides additional social support.

See stats on chronic conditions at the end of this document.

We are looking to expand our network of community, tools, and resources that empower people impacted by epilepsy to live their best life.

The funding will assist our mission to connect epilepsy patients and caregivers to mentors, healthcare providers, events, and other high quality resources to improve the quality of life for the caregiver and patient.
Use of proceeds

We seek up to $1.5MM* seed round investment to finance:

*Subject to minimum funding of $120K 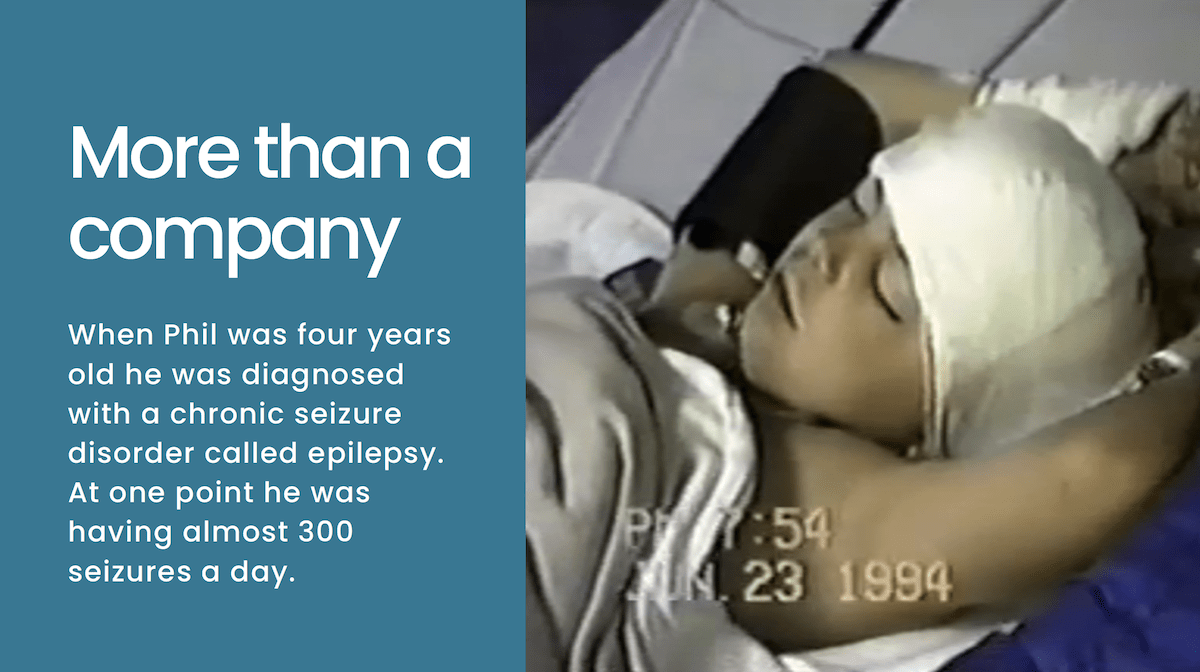 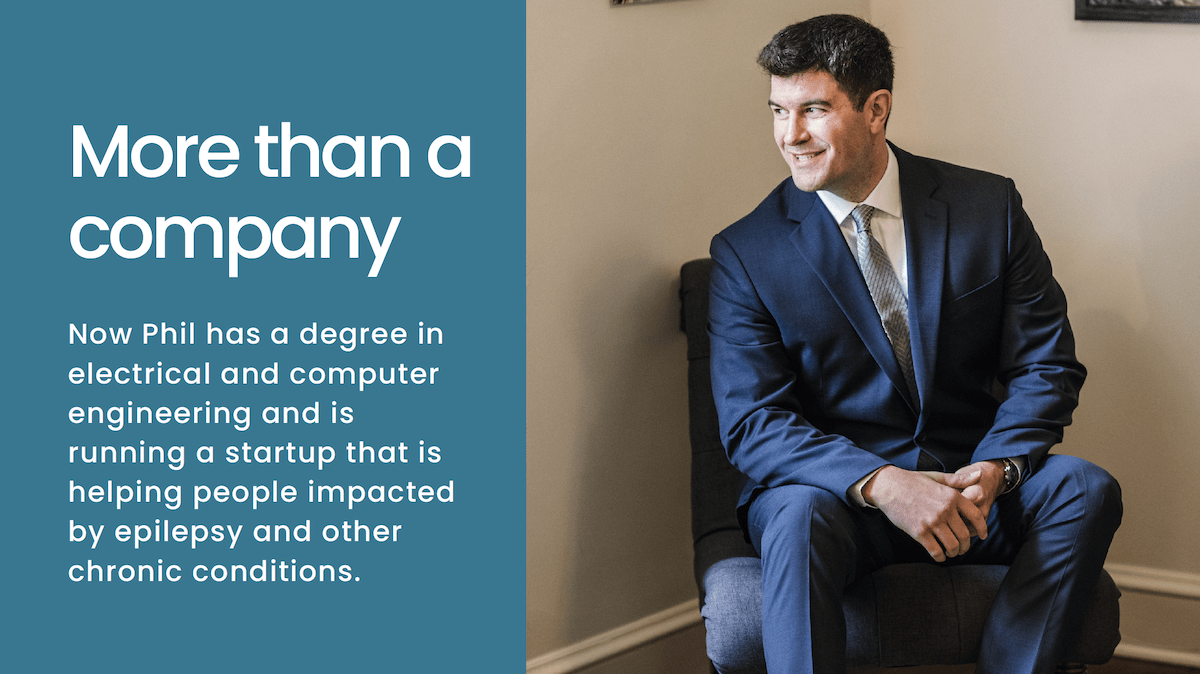 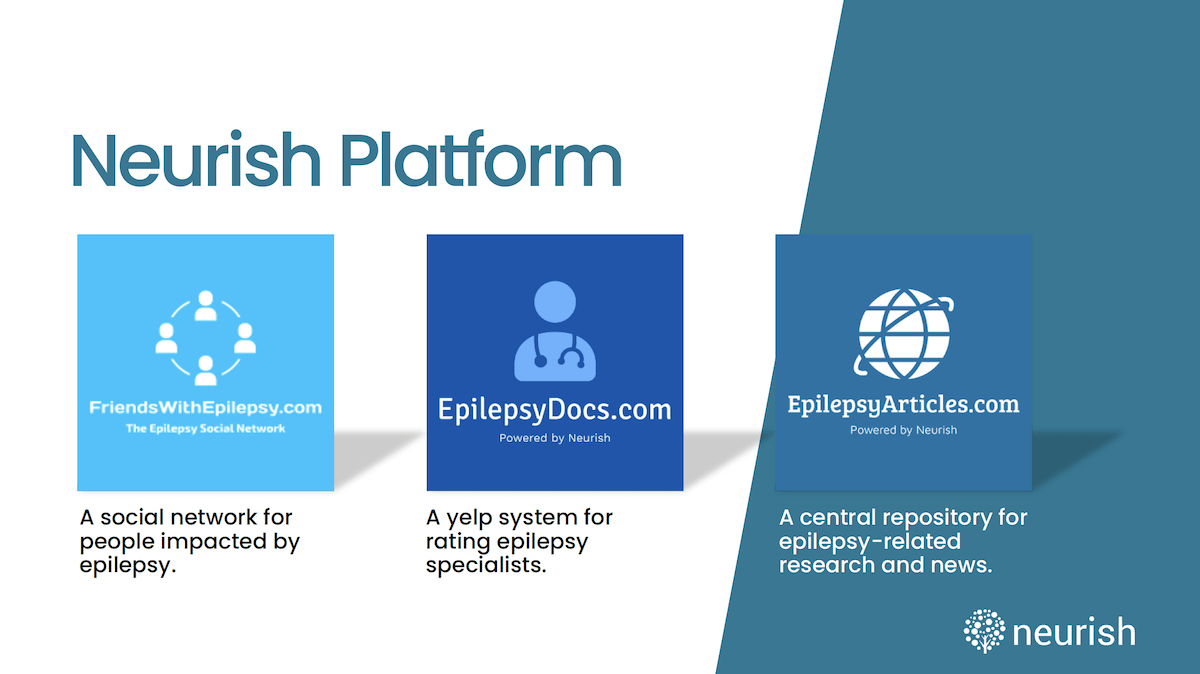 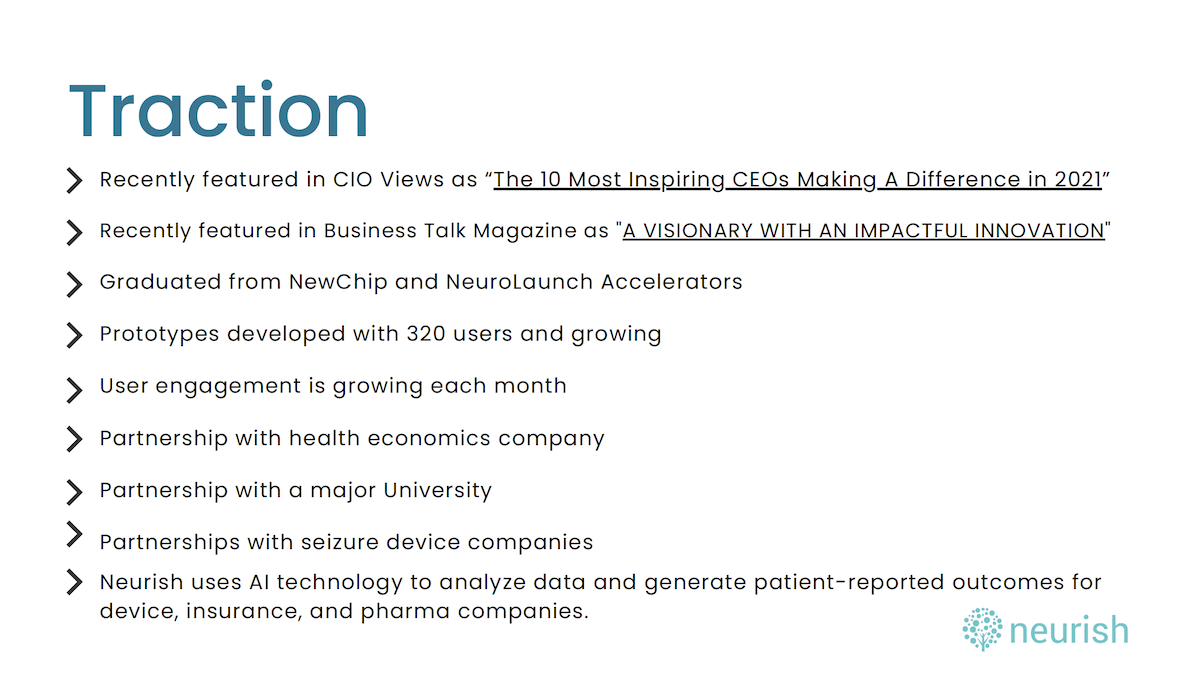 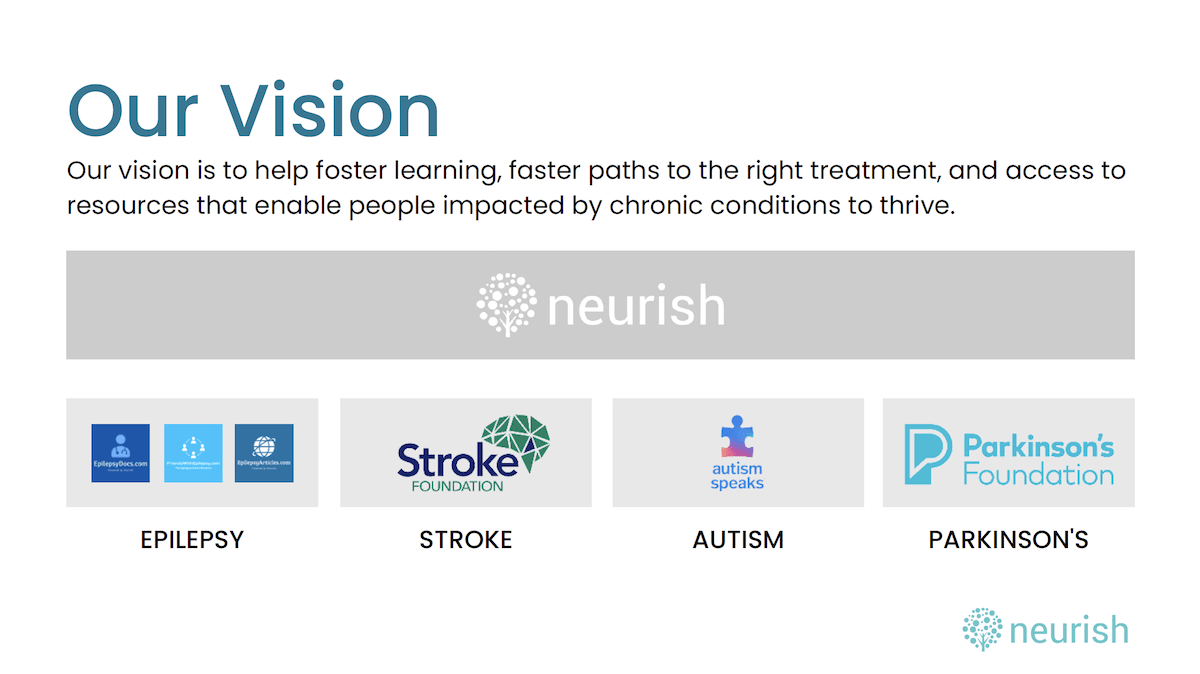 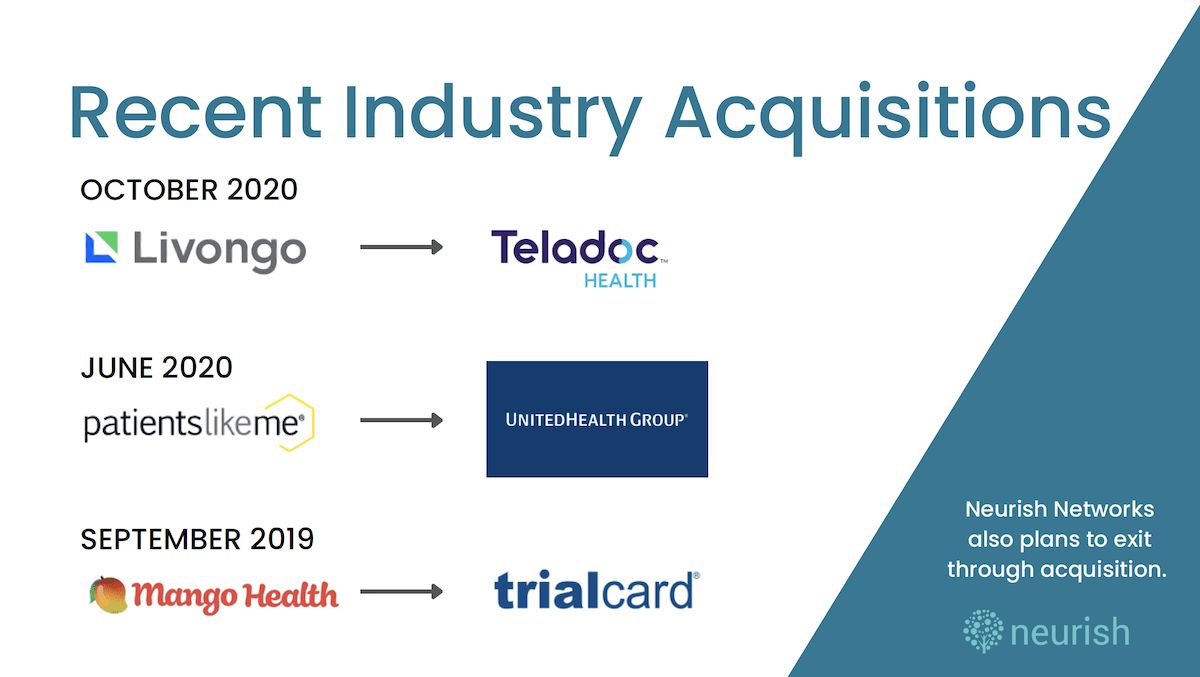 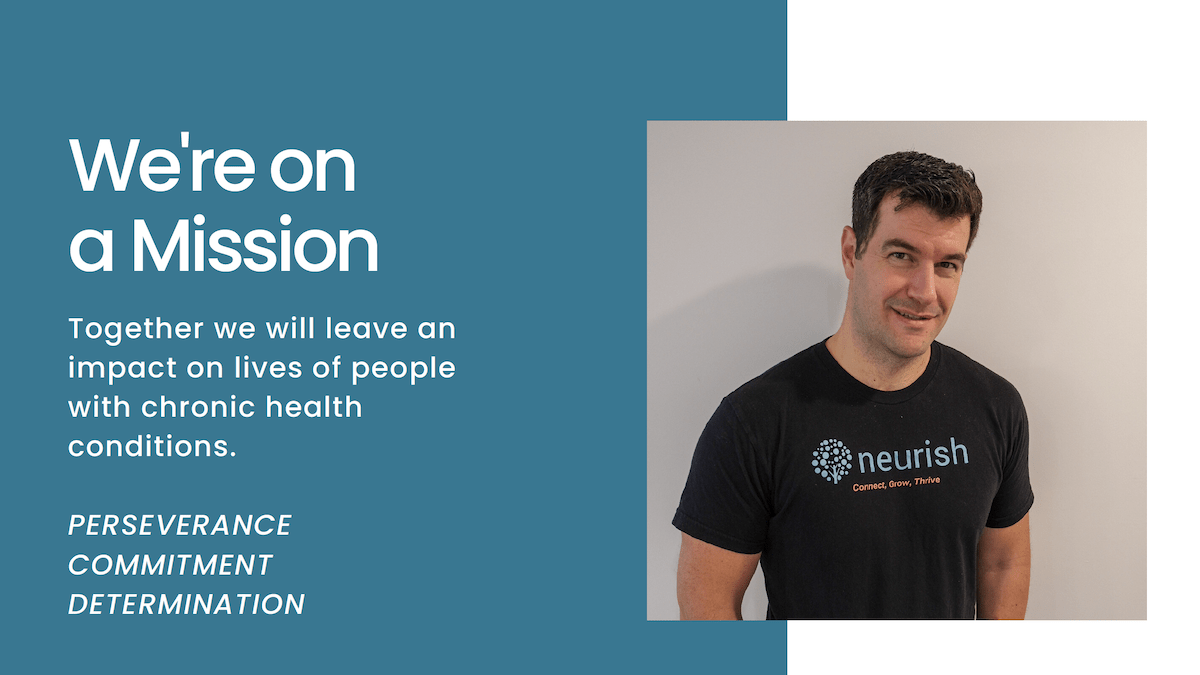 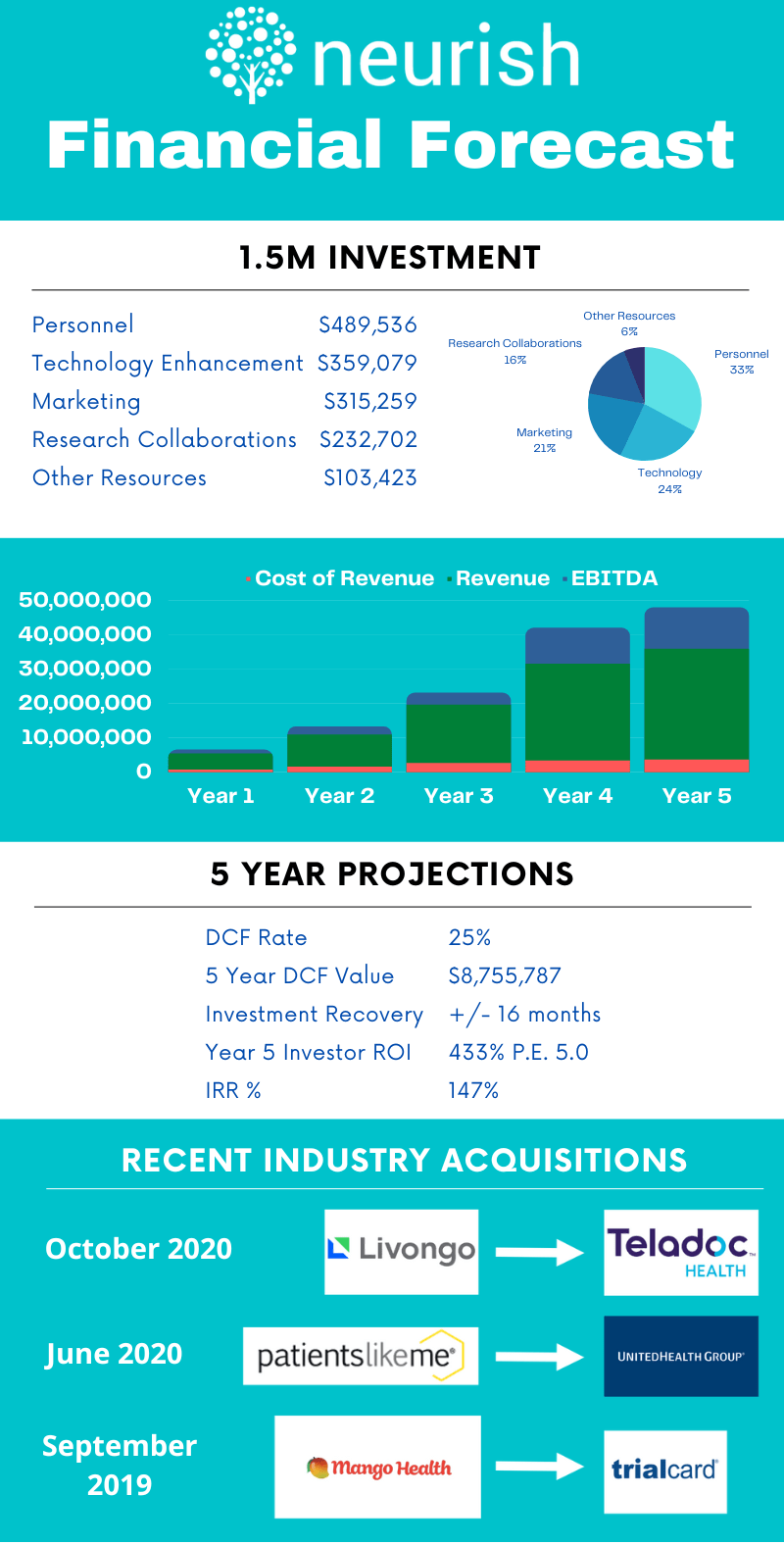 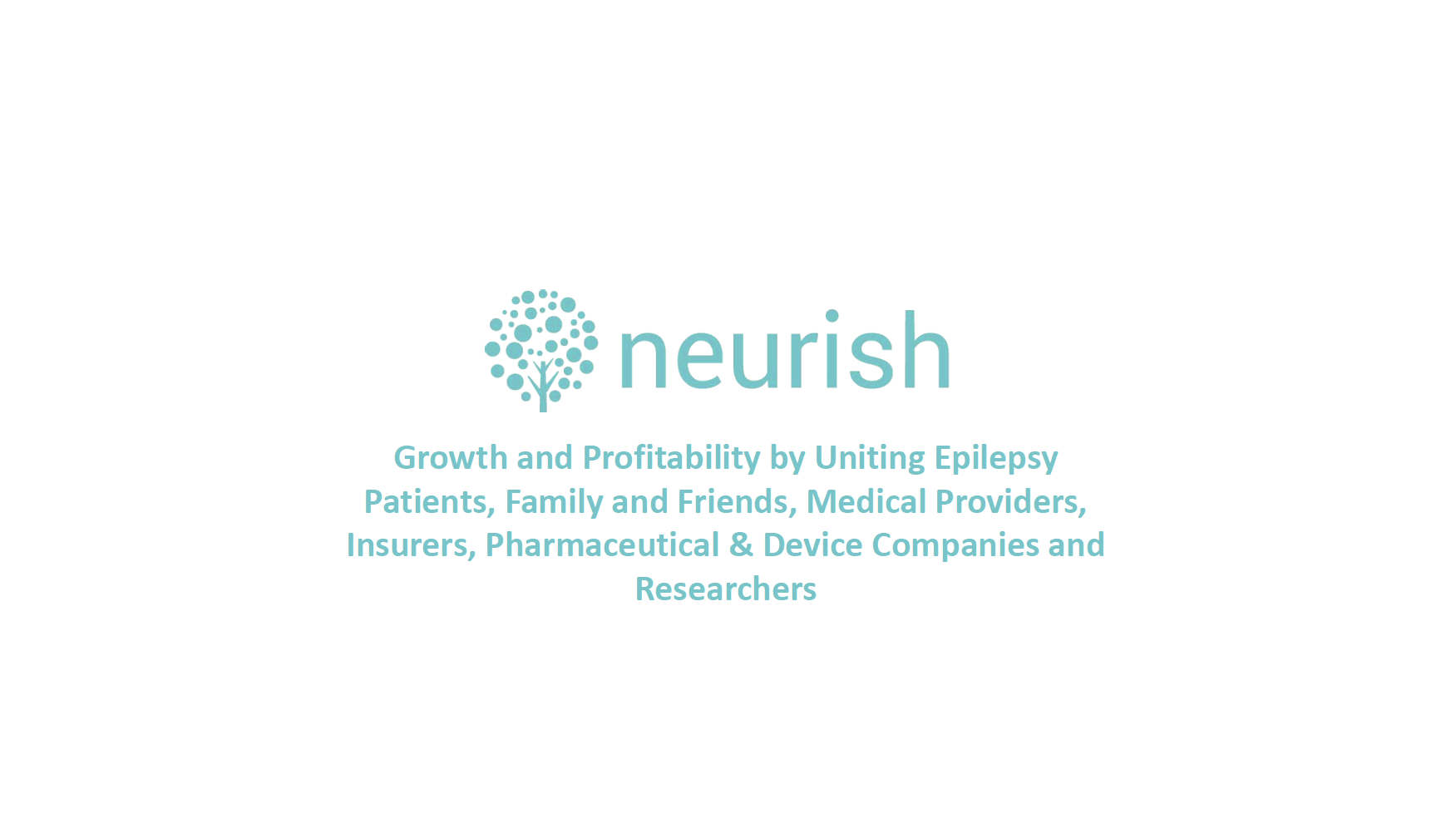 Some of the Perks
Some of the perks we are offering our early investors:

Investment Terms
Neurish has launched a $1.5MM seed round, which is now live and open for investment. As part of the private launch we are offering the following discounted terms.

Some of the perks we are offering our SAFE investors: 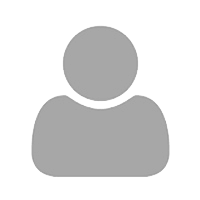 This is a danger alert—check it out!
Confirm